Hi there, and thanks for visiting. In case you celebrate it, we (I write in the plural on behalf of our small family here) wish you merry Christmas, nice holidays, a good and happy new year 2018, health, wealth, and all the other stuff, or, using Spock’s words: live long and prosper!

I was a bit quiet on this blog lately, and that’s mostly because I discovered some new and really nice video creators, or vloggers as some call these. And I want to show you some in case you’re also interested. And since it’s hard to decide on which of their videos to show you as an introduction, I’ll simply show you the first ones I saw of them.

The first one was Eduardo, a writer and movie dramaturg from Chile, who’s now living in England together with his girlfriend Fran. Eduardo loves film and street photography (and is pretty good with that), tho the first I saw from him was using a digital back on his Hasselblad medium format camera. It’s worth a look, and his video, storytelling, and photos are beautiful:

After that, I saw a video of a young woman discovering film photography using the exact same camera I had when I was much younger – a Canon A-1 (which is a thing of beauty, but eats batteries for breakfast). Turned out that Dana’s husband Lou is a really good filmmaker (using a Canon 5D Mk3), and together they also are really good story tellers – and they even know Eduardo and Fran from above. But here’s Dana doing a really good job with that Canon film camera:

My latest “discovery” was actually a recommendation from Google’s Youtube, so I watched Sean Tucker talking about his street photography philosophy (in Rome with the Fujifilm XT-20). He’s a pro photographer sharing some really cool and useful tips without much self presentation as I would say (and comparing him with others who do mainly that), so as the other two above, his channel is really recommended. So here’s that first video I saw from him:

See some of his photos on Flickr, or visit his page for more. And the same goes for Lou & Dana’s “Wild We Roam“, and also for Eduardo’s site.

So, sometimes Google’s recommendations actually do work. It’s even a bit frightening to think about how good they are matching my taste of content with their recommendations at times – they must have made a real good profile for/of me already.

“Anybody getting something outrageously fun and photographic for Christmas?” – that was a question from Kirk Tuck on his blog, and I answered that no, I didn’t order the latest Leica M-10 or Hasselblad or Fujifilm medium format cameras, but ordered a book instead. Really looking forward to that one.

Which brings me back in a circle to my own photography, and doings, and plans. The last thing I’ve tried with my photos was another “look” for black & white, kind of more traditional or “old school” (which some might argue is black & white anyway). So my approach to it was to take the photos in raw as usual, then converting them to colour .tif files with Olympus Viewer as usual, and then use Silver Efex Pro2 for black & white conversion with a “custom” preset I’ve made myself: take their “019 Fine Arts” preset, then add a white border and some coffee toning, and 95% of the post production work is done. What’s still missing is a bit of curves manipulation, and the adding of metadata like a title in Exif and such, which I do with Rawtherapee. As usual. And here are three examples of how this looks: 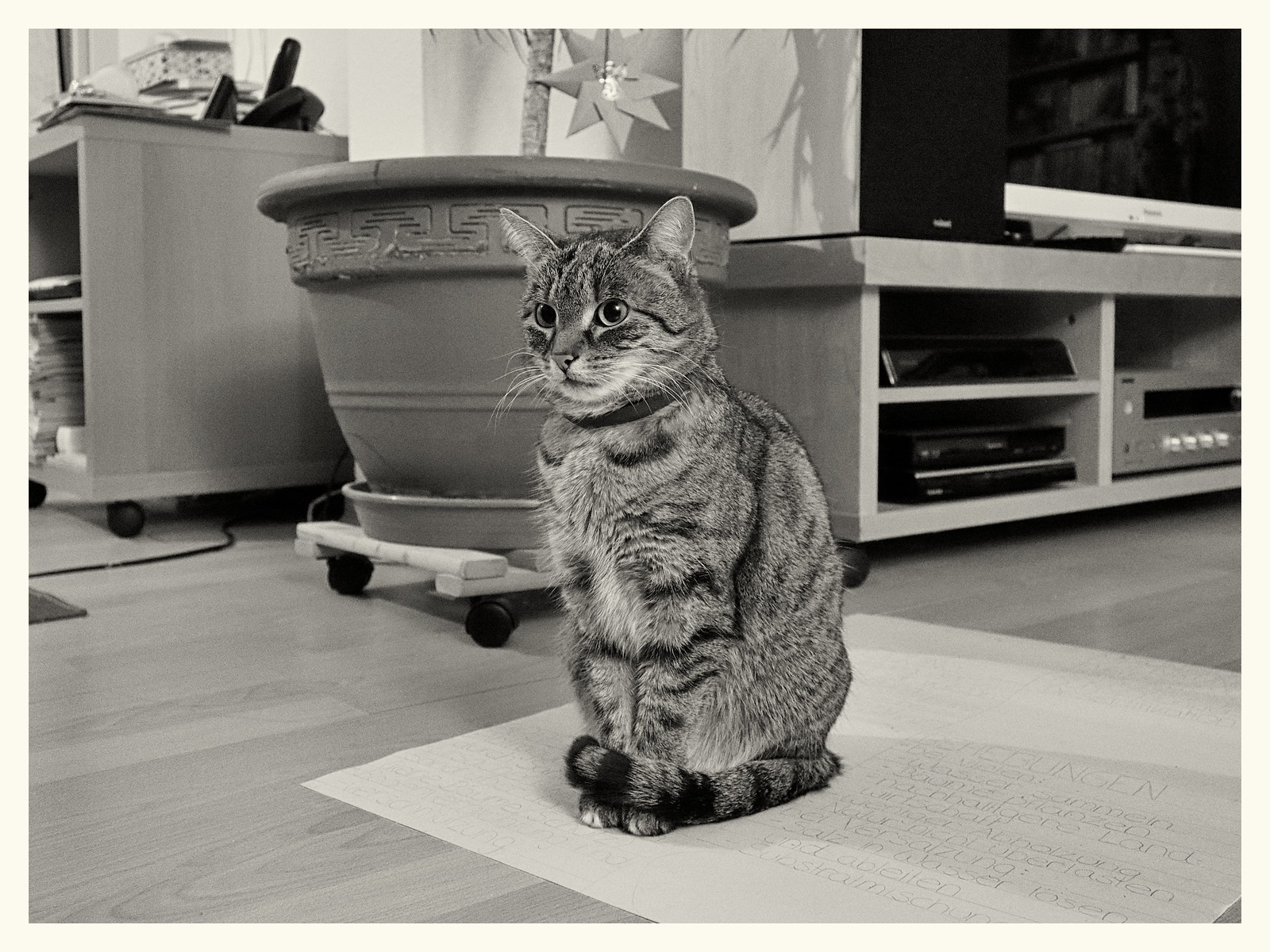 Andre, December 2017 (this was taken using my Yongnuo compact flash at 1/4 power bounced over the ceiling from Arno’s desk (opposite of Andre’s), with the 45mm lens at f/2.2)

And finally, a “selfie”, triggered with my (Mitchie’s old) Google Nexus 5 smartphone:

The next two were actually the last photos I took before Christmas, both of Tuna the cat. Simply cannot resist sometimes when I see something like it: 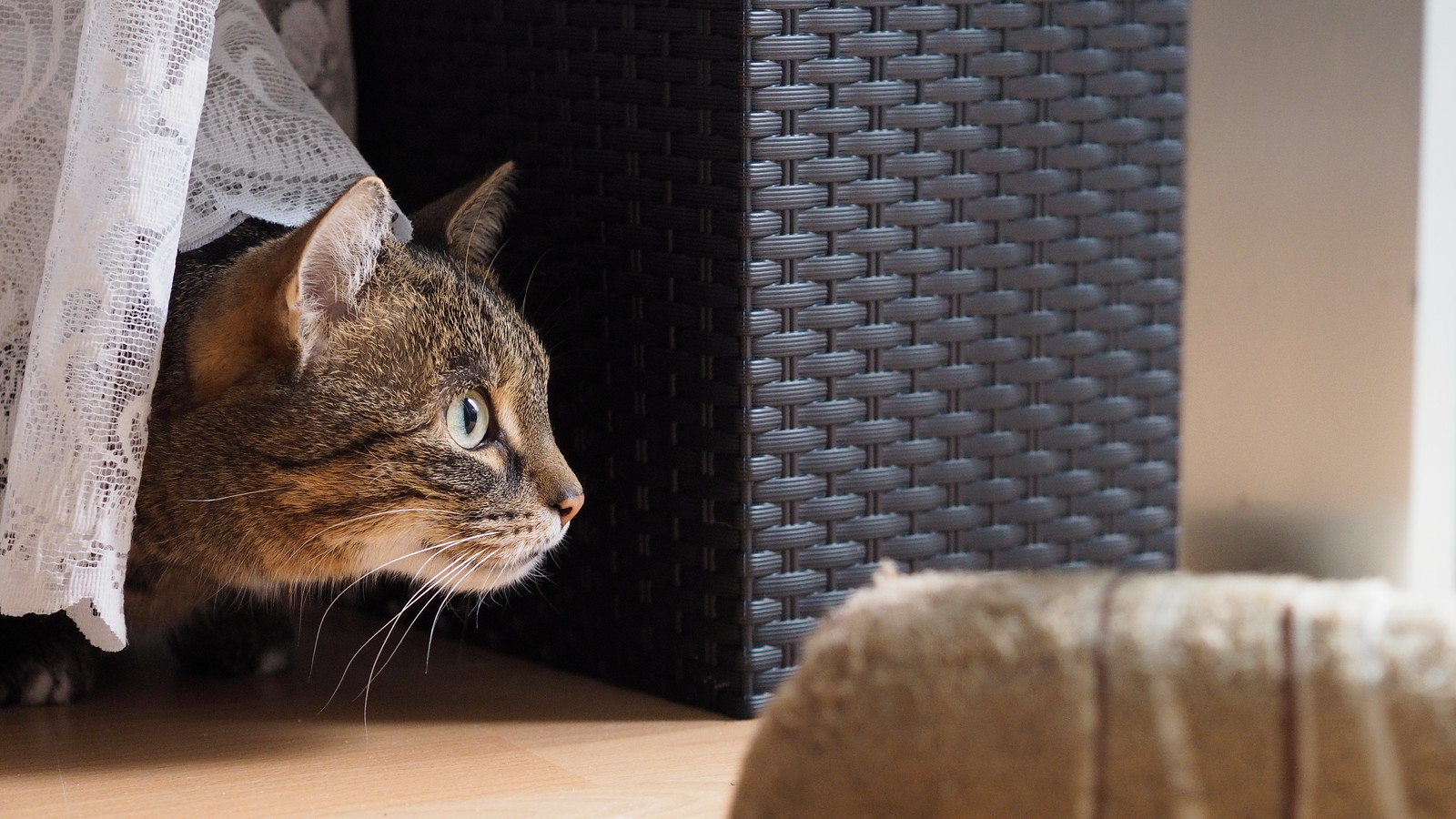 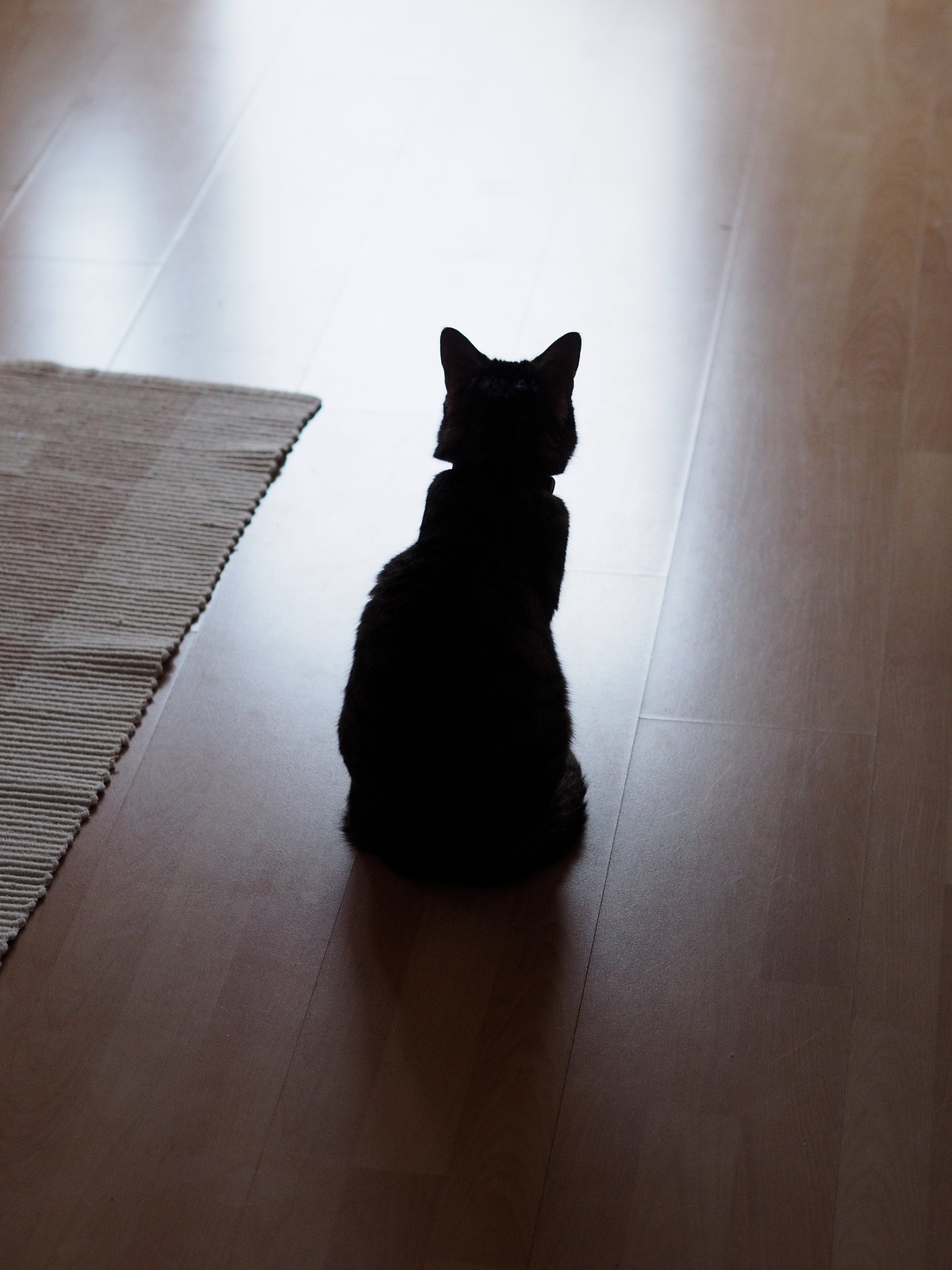 About future plans – here’s some music first, from user “nominal6” on Soundcloud again (CC, so I’m allowed to play it here). You can listen to it while reading the rest of my article:

I plan to do some more collaborations with this user nominal6, who calls himself ‘jonetsu’ on the Linux Musicians board. First, I like that he does everything with free tools, and I also like that everything is CC’ed like my own content – so I could for instance take his music for videos I’d publish on Youtube or Vimeo or wherever.

I also looked at some older photos, like Kirk Tuck does it sometimes. So here are some from 2011 or newer:

Haenson at work in his studio, January 2014

Sadly Hans has retired from his studio photography already, and sold it all – it always was a great pleasure working with him, even when at that time my digital photography was in its first baby steps. Here’s another photo (of a nude girl) I took in his studios. She was a former Czech “Playmate” from that famous magazine. I used my new toned black & white recipe on her here for that “vintage” look:

Starting January, I’ll also rejoin the IBM Fotoklub. Here’s one I took while I was a member of that club, but with my own strobe equipment already. The model calls herself “An Ne”, and I forgot who made the fancy head piece (or who was the MUA (= makeup artist):

The show must go on
January 2014, Frankfurt

Shows that with good lighting, you don’t need more than an Olympus E-PL5 and the 45mm/1.8 lens to take a nice picture, hm?

I like this one of Rhia and Meike, taken in Mainz on a cold January day with that exact same E-PL5 camera and lens. Or this one, which is one of my all-time favourites:

Mélanie is a real good photographer herself, and I’d love to work with her (and some others) again. So much for my wishes for 2018, for myself.

For you (for whomever is still reading), thanks, and all the best for 2018!