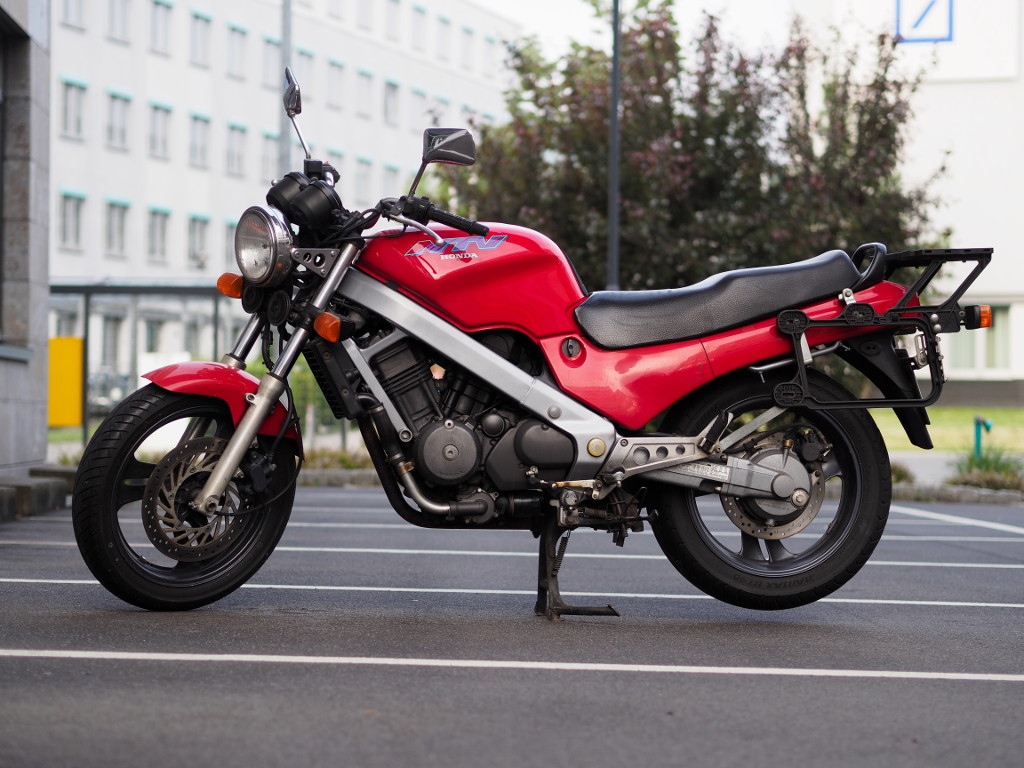 I showed you some black & white photos of my motorcycle lately, explaining what makes it so special. And since it has to go through its bi-annual inspection/surveillance this month, I decided to first use it a bit of course. The weather is slowly getting better – which it should, considering that it’s end of May already – and riding a motorbike is just plain fun.

So I took it to work, where I also parked it inside of the garage when the weather was uncertain:

My motorcycle. In my employers’ garage.

Last Saturday, I visited our local Honda dealer and made appointments for its checkup, and I also said that if it has to stay overnight, then I’d need a replacement to go to work next day. The dealer said “Sure”, so I’ll ride something new soon. Let’s see what he’ll give me.

But I also wanted to look at some motorcycle from another brand and vendor, so I went to the next dealer, not far away. I couldn’t test ride that specific model, but only sit on it in the store:

Sitting on a bicycle with 75hp

This is a Yamaha MT-07, and right after the Beamer “Big Bird” (1200GS), it’s at the moment the most sold motorcycle in Germany. And just climbing onto its seat is enough to explain that success: this is some 30kg less than mine, tho it is also some 25hp stronger. It’s also a twin cylinder engine and should be real fun to ride.

Someone who saw that photo on Flickr asked whether I plan to get this, and I said no, not at the moment. If I’d have 6k€ spare change laying around, I certainly would. But I have a very nice motorcycle, and there are other things to pay.

My helmet is kind of dissolving from the inside – the pad right above the center of my head is falling apart, a well-known issue with older Arai helmets (and mine is almost as old as my motorbike, so…). Because of this, I started to always wear a storm hood under the helmet, and I decided that this is no fun with my long hair – so that had to go.

So on Sunday, both Mitchie and Zuleikha gave me a haircut (thanks ladies!), and after that, Zuleikha also took my portrait:

And with the beginning of this week, the rain came. Plus it was rather cold for May. But the prediction for today was better, so I took another chance to ride to work, this time parking the motorcycle outside again:

I took the first two photos using my 14mm Panasonic wide angle lens, but both the portrait and this last one were taken with the 45mm Olympus short telephoto lens (the portrait with f/6.3 and a studio strobe, the motorcycle with the lens wide open at f/1.8).

Tomorrow is a public holiday around here, so it’s a day off. On Friday I’ll have to take the car to transport something, but next week will begin with early shifts, and with the exchange of motorcycles at the Honda dealer. So I’ll report about that of course. With photos.